As of the 6th of December, Gas and Electricity Year Ahead Wholesale costs are higher, when compared to last month’s report. The Oil price is lower at $73 per barrel, from $84.

A number of factors continue to add nervousness, which resulted in renewed volatility for Gas and Electricity prices. The focus has been on Europe’s low level of Gas Storage, which is just 66% full compared to 86% last year. Russia had indicated a willingness to increase flows of Gas into Europe, although it was also understood this would likely be subject to the sign off by Europe of the Nord Stream 2 pipeline. Germany has refused this until the operating company complies with German law and so flows have been minimal. There appears to be a growing feeling of mistrust, that Russia can use Gas as a political tool, something that will be raised in a conversation between Presidents Biden and Putin. With Gas being the main source of generation, Electricity prices have seen a similar price movement.

Over the last month we have started to see growing coronavirus cases, which has resulted in increased lockdown measures across Europe. The emergence of the new Omicron variant, which potentially may show some resistance to vaccines and spread quicker, makes economic growth and energy use forecasts uncertain.

The Met Office forecast for the next month suggests temperatures generally at seasonal norm with periods of strong winds and the potential for snow on higher ground and overnight frosts.

Wholesale prices for 2021 and early 2022 are very high when compared to recent years. Prices for later in 2022 and 2023 show much better value. Generally, the Wholesale element makes up in the region of just 40% of the total cost of an Electricity bill and 60% for Gas, but these percentages are currently much higher, estimated in excess of 60% and 80%.

Increasing third-party costs are noticeable in Electricity contracts. These include Transmission, Distribution, and government policy levies, which ensure we have enough energy to meet demand and provide investment.

Over the next year or two, the way some of these charges are calculated will change, under the Targeted Charging Review. Energy suppliers can choose whether to fix Electricity contract costs, pass them through or leave that decision until a later date. This does allow for the possibility of a review of the Distribution charges in some fixed price Electricity contracts from April 2022. It is understood the Transmission element will be delayed until April 2023.

The direction of prices will likely depend on European Gas Storage levels. Should there be prolonged periods of cold temperatures this Winter and if Russia does not provide additional supplies, there is the potential for continued price volatility.

We would advise looking at your options for contracts ending the first quarter of 2022. There is an opportunity to contract for two or three years to dilute the impact of the higher short-term costs.

Germany will not sign off Russia’s use of the Nord Stream 2 Gas pipeline until the operating company complies with German law. This continues to cause concern due to European Gas Storage levels being just 66% full compared to 86% last year and worries regarding supplies should there be a prolonged cold spell. In the meantime, Russia will likely continue to restrict flows.

The UK’s Gas Storage is full, with good supplies from the North Sea and Norway, topped up by improved LNG shipments. However, as Gas is a global commodity, our Gas Wholesale price has been pressured upwards. An additional domestic pressure has come from an increased use of Gas for Electricity generation due to lower Wind.

Temperatures will likely remain in the region of seasonal norm in December, reducing the likelihood of a period of sustained heating demand. 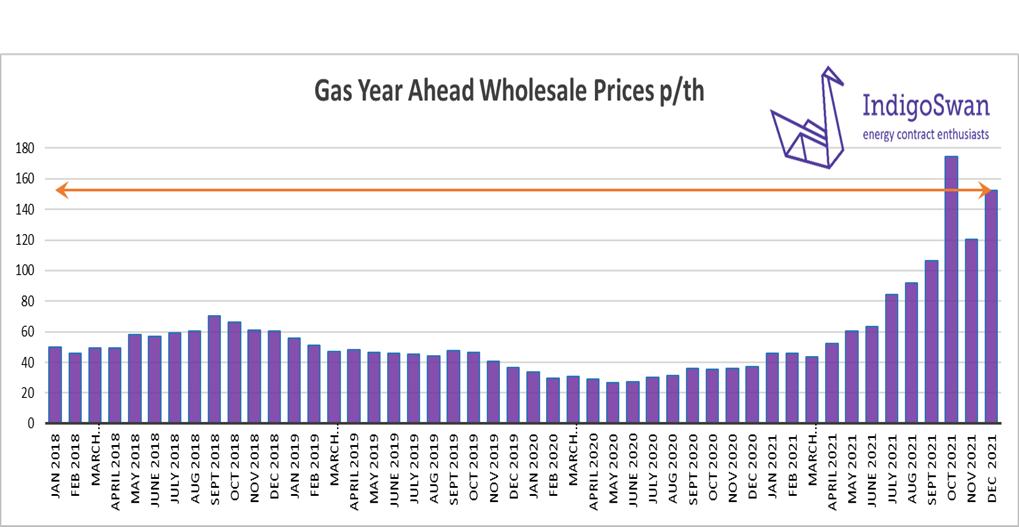 With the increase in Gas Wholesale prices due to global supply and Storage issues, and Gas providing 39% of generation in November and 38% so far in December, Electricity prices are following higher.

Wind’s contribution was just 23% in November. With an improvement so far this month and the potential for some stronger Winds, the demand on Gas for generation may ease. The projection for the full return of one of our Electricity Interconnectors with France, was revised from 2022/23, to December 2022. The new North Sea Link with Norway, which is sourced from Hydro, is providing between 1.5% to 2% of our Electricity.

Despite the planned closure of Coal generation in the UK by 2024, it still regularly contributes 2% of supplies.

The National Grid has mechanisms in place, to secure additional supplies or reduce demand. These do come at a cost, in the form of higher third-party charges within Electricity bills, but provide an element of stability to prices which otherwise may react even more dramatically.