As of the 1st of February, Gas and Electricity Year Ahead Wholesale costs were lower, when compared to last month’s report. The Oil price is at a seven year high of $91 per barrel, from $80, due to supply restrictions.

Following the extreme volatility seen late December, prices fell during the early part of January. Since that time, a number of price pressures have created two weeks of steady increases.

There is a great deal of uncertainty as to the availability of Gas supplies into Europe. Nord Stream 2 has yet to be authorised, although measures are being taken to make it compliant with Germany’s requirements. The EU are now also seeing if it complies with Europe’s energy policy. Russia has refused to provide additional supplies through existing routes, despite EU Gas Storage levels being just 38% full compared to 52% last year. With Russian troops on the border with Ukraine, the decision may be to withhold sign off until tensions ease. In the event of a conflict, the resulting sanctions could potentially see all Russian supplies stopped, supply issues and price spikes, which would also impact on Electricity prices due to the use of Gas for generation.

The Met Office forecast for the next month suggests temperatures generally at seasonal norm with periods of strong winds, easing the use of Gas for heating and Electricity generation.

Over the next year, the way some of these charges are calculated will change, under the Targeted Charging Review. Energy suppliers can choose whether to fix Electricity contract costs, pass them through or leave that decision until a later date. This does allow for the possibility of a review of the Distribution charges in some fixed price Electricity contracts from April 2022. It is understood the Transmission element will be delayed until at least April 2023.

The direction of prices will likely depend on Russia’s next moves. Any hostile actions towards Ukraine should see prices increase, whereas a de-escalation would likely see a more positive outlook and the use of Nord Stream 2, to improve Gas Storage levels.

Gas prices are high due to low EU Gas Storage levels, which are just 38% full compared to 52% last year, and the threat that sanctions may be imposed should Russia invade Ukraine. This could potentially see 40% of Europe’s Gas cut off, creating shortages, price spikes and considerable economic damage. Although most of the UK’s Gas comes from the North Sea and Norway, our prices will follow, especially as we are very reliant on Gas for heating and to generate Electricity.

Another scenario is that tensions ease, Nord Stream 2 is given approval and Gas continues to flow, in which case we would expect prices to reflect the more positive outlook.

Temperatures will likely remain in the region of seasonal norm in February, reducing the likelihood of a period of high sustained heating demand. 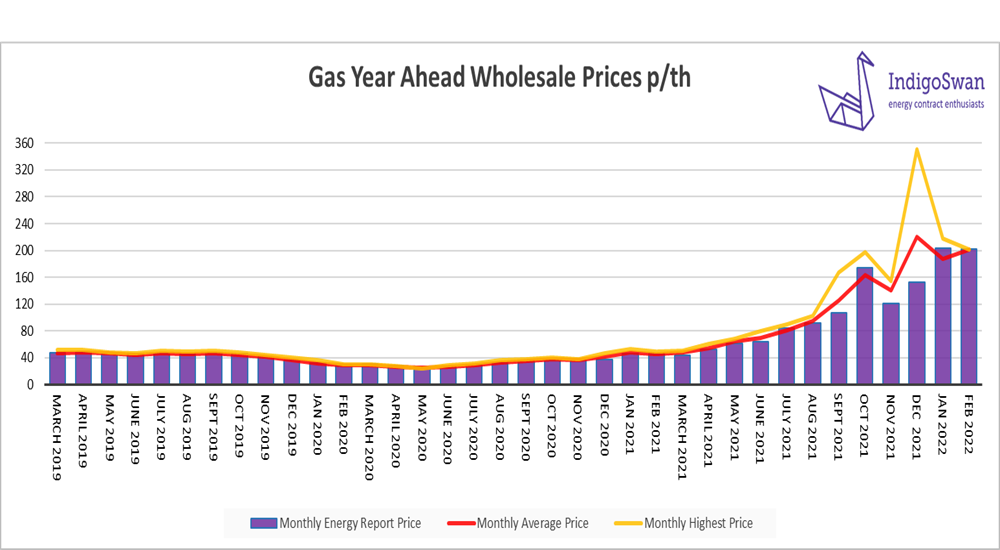 With Gas providing 40% of generation in January, Electricity prices followed Gas lower. Gas supply issues and the potential for further cuts should Russia invade Ukraine, are creating continued volatility. There is also the possibility that the current tensions will ease, which would likely result in lower costs.

Wind’s contribution to generation has improved in recent days and accounted for 23% in January, from 22% in December, although it did fall as low as 5% on the 14th of January. That level of uncertainty creates issues for the network in having to balance the system by using other assets. The National Grid has mechanisms in place, to secure additional supplies or reduce demand. These do come at a cost, in the form of higher third-party charges within Electricity bills, but provide an element of stability to prices which otherwise may react even more dramatically.

Since October 2021, the North Sea Link Interconnector with Norway has been providing in the region of 2% of our Electricity at a time when imports from France are less reliable due to their ongoing Nuclear safety issues.