As of the 14 May, Gas and Electricity Year Ahead Wholesale costs are slightly lower when compared to last month’s report.

As the world continues to prevent the spread of the coronavirus there has been a significant reduction in Oil demand, with Brent currently at $29.19 a barrel. During April Brent dropped to the lowest level since 1999, with the US equivalent dropping to -$37/bbl. Saudi Arabia announced recently that it will make even deeper cuts to its Oil production in June to help balance the market and support prices.

Gas Wholesale costs are lower than 2016, as illustrated by our graph. Although LNG deliveries were still high in April, they took a slight dip compared to previous months and were the lowest since October 2019. Gas use for generation was down slightly to 32% from 35% in March.

Electricity Wholesale prices are also at 2016 levels. Wind contribution was down to 18% from 24% in March. Some of this shortfall was made up by additional Solar at 8%. Coal is a more expensive form of generation and provided just 1%. Coal power stations continue to close early, prior to a full shut down by 2024, to help meet carbon reduction targets. For 18 days in April, there was no coal within the UK’s power generation mix owing to a coronavirus related collapse in Electricity demand and increased generation from Solar. This is the longest period the UK has been without Coal in the mix since 1882.

The Met Office forecast for the next month suggests mild conditions with light winds with some regions likely to see above average temperatures. This would suggest there would be no pressure on Gas supplies for heating but a continued need for Gas generation with lighter winds.

Wholesale prices are extremely competitive, but it should be remembered that the Wholesale element makes up in the region of just 40% of the total cost of an Electricity bill. Gas is roughly 55%.

The influence of higher third-party costs is increasingly noticeable in Electricity contracts. These include, Transportation, Distribution and government policy levies.

Over the next few years, the way some of these charges are calculated will change, under the Targeted Charging Review, although the details are not yet available. Initially the first change to Transportation costs was due April 2021, but with delays issuing price guidelines to energy suppliers, this has been postponed until April 2022. The planned change to Distribution charges is still set for April 2022. This does mean that the expected opening of some fixed priced contracts should not take place until 2022.

To benefit from the low Wholesale prices we advise requesting supplier offers for all 2020 and early 2021 start contracts. Be aware that suppliers are tightening their credit requirements and reducing their risk appetite, but good forward contracts options can still be negotiated.

Storage levels remain down on 2019, but there will be opportunities to increase these with warmer weather. Although many businesses remain closed and we are seeing reduced Gas demand in the commercial sector, this has been replaced by a slight increase in domestic use for heating as we all work from home. With the Government’s requested restart of manufacturing and factories at the beginning of May, we expect Gas demand to increase again as we move UK Plc back to a new “normal”.

The continued low Oil price has impacted on Gas, due to some historic contractual links. However, the Gas price did not plummet as extremely as Oil and remained low but relatively stable during the month. It is expected that Oil producing countries will shortly reduce production to stimulate prices, which is likely to feed through to higher Gas prices in the coming months.

There continues to be a significant reduction in the national Electricity demand, with an almost historic low level reached in early May. Business closures following the coronavirus lockdown is the main driver behind the historic falls but National Grid has not yet had to issue any emergency notices to address the supply/ demand balance.

Although some lockdown restrictions are starting to be eased, the return to “normal” operations for most businesses is still a way off. National Grid is forecasting a “worse case” scenario of the 20% reduction in Electricity demand. This will keep pressure on prices to remain at their current low levels.

With a lower Gas cost, its use for generation has also helped the Electricity price remain low. It is likely that in the coming months, major Oil producing nations will reduce output to increase both Oil and Gas costs. This could have an impact on Electricity prices, but any increase in Renewables generation would likely offset a rise. 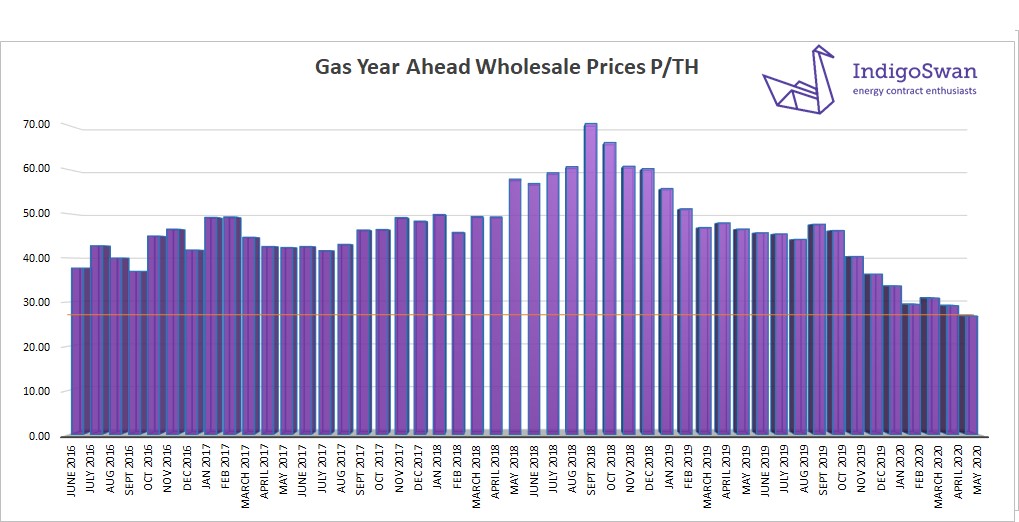 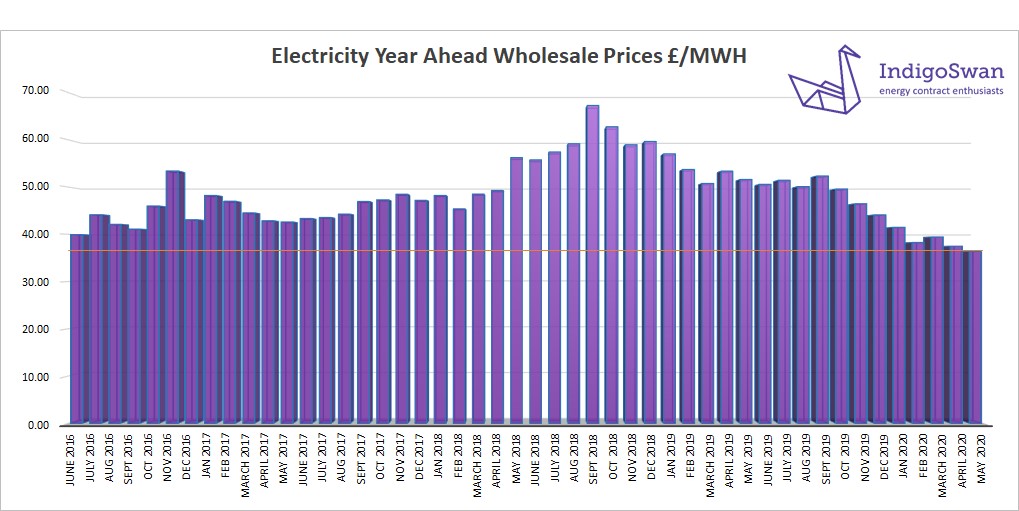