As of the 5th of April, Gas and Electricity Year Ahead Wholesale costs were higher, when compared to last month’s report. The Oil price remains high at $107 per barrel, from $101, although we did see it peak at almost $130.

The conflict in Ukraine continues to dominate price direction for Oil, Gas and Electricity. News that the US, UK and EU were all banning or taking measures to restrict imports of Russian fuels, caused a considerable increase in prices. The concern was that Russia may respond by cutting off Gas supplies to Europe, which did not materialise. Peace talks did provide some optimism, with Russian troops pulling back from Kyiv, but this appears to be a strategic move to focus resources in other regions. There is evidence that Russian forces have committed war crimes, which may persuade the EU to ban Coal imports. President Putin has also stated that “unfriendly” countries should pay for Gas in roubles, which most have rejected. This could create supply issues.

The EU has set Gas Storage targets, with the intention of ensuring there are sufficient supplies for this coming winter. They are currently 26% full compared to 31% last year.

The Met Office forecast suggests below seasonal norm temperatures and slight winds at the start of April, with the potential for more wind and milder temperatures later in the month.

Over the next year, the way these charges are calculated will change, under the Targeted Charging Review. Energy suppliers can choose whether to fix Electricity contract costs, pass them through or leave that decision until a later date. This does allow for the possibility of a review of the Distribution, Transmission and Balancing charges in some fixed price Electricity contracts. The Transmission element changes will be delayed until at least April 2023.

Indigo Swan will be working closely with energy suppliers to best help all our customers through this worrying time, where there is a great deal of uncertainty as to developments in Ukraine and the impact they has on energy costs. Some suppliers are still hesitant to provide contract offers and they may be withdrawn at short notice.

The continued threat of disruption to Russian Gas into Europe has been weighing heavily on prices, as Russia provides in the region of 40% of EU supplies. They chose not to stop exports despite the US, UK and EU announcing their own restrictions. This was likely due to Russia needing the income to support their economy. A more recent development has been a slightly confused insistence that “unfriendly” countries will need to pay for Russian Gas in roubles. A strong rejection of this by EU members threatens to reduce imports and the opportunity to increase Storage levels, which are just 26% full. April generally sees Gas start to be diverted to Storage in readiness for the higher winter demand.

In the UK we have a relatively low Gas Storage capacity, although levels are currently high. The recent below seasonal norm temperatures and high use for Electricity generation, have added a price pressure. 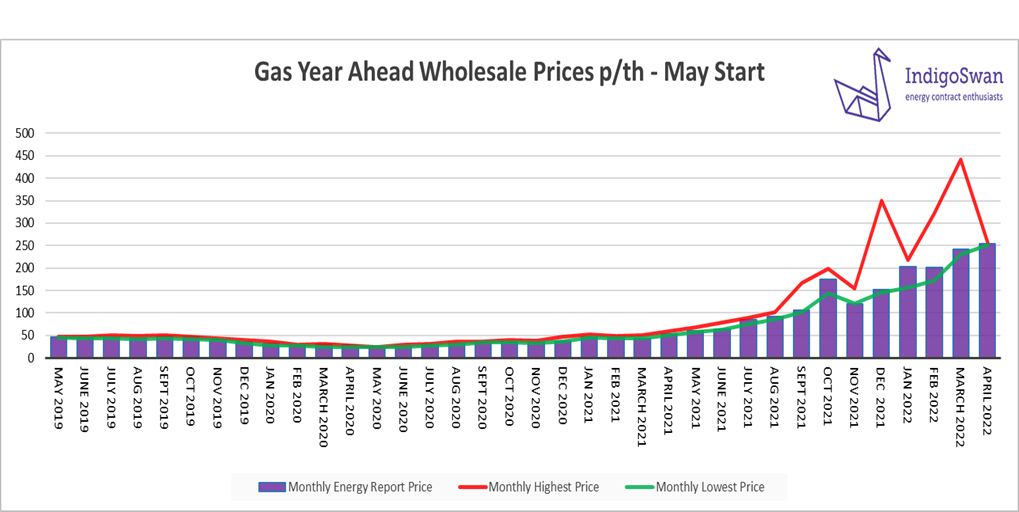 The contribution of Gas to generation in March was higher at 38%, compared to 24% in February. This reliance on Gas does mean that Electricity prices will follow Gas very closely. Wind provided a six-month low of just 19% of generation, down from the high 35% last month. Unfortunately, Wind will remain unreliable, with no effective way of storing excess power for use when the contribution is lower.

The National Grid has mechanisms in place to secure additional supplies or reduce demand. These do come at a cost premium, in the form of higher third-party charges within Electricity bills, but provide an element of stability to prices which otherwise may react even more dramatically.

Due to the reliance on Gas generation in the UK, Electricity prices will continue to be impacted by the events in Ukraine and the actions taken by both sides. There are other considerations which are factored into prices, such as the announcement by EDF that their forecasts for French Nuclear generation for 2022 are now lower, which may impact on the availability of supplies across Europe through Interconnectors.