As of the 1st of March, Gas and Electricity Year Ahead Wholesale costs were higher, when compared to last month’s report. The Oil price is at a seven year high of $101 per barrel, from $91, due to supply restrictions.

On the 24th of February, President Putin announced the military operation which saw Russian troops invade Ukraine from multiple points, targeting sites of strategic importance. The scale of the operation would indicate that their intention is to replace the democratic government with their own.

The reaction from most countries has been condemnation and increased sanctions to target organisations, individuals, finance, and strategically targeted exports to Russia. At this time measures have stopped short of any significant restrictions on Gas exports.

The impact on energy prices has been considerable, driven by the fear that at some point, either party may reduce or stop Gas exports to Europe. EU Gas Storage levels are already low at 29% full compared to 38% last year and would normally start importing again in April, ready for the coming winter.

The Met Office forecast for the next month suggests temperatures generally at seasonal norm with winds due to be lighter than we saw in February.

Over the next year, the way some of these charges are calculated will change, under the Targeted Charging Review. Energy suppliers can choose whether to fix Electricity contract costs, pass them through or leave that decision until a later date. This does allow for the possibility of a review of the Distribution charges in some fixed price Electricity contracts from April 2022. It is understood the Transmission element will be delayed until at least April 2023.

Indigo Swan will be working closely with energy suppliers to best help all our customers through this worrying time, where there is a great deal of uncertainty as to developments in the Ukraine and the impact that has on energy costs. Suppliers are likely to be hesitant to provide contract offers and they may be withdrawn at short notice.

The threat that Gas supplies from Russia into Europe could be disrupted has been weighing heavily on prices, especially as Russia provides in the region of 40% of supplies, with EU Storage levels at just 29% full compared to 38% last year. Although Nord Stream 2 had already been delayed, the military action has resulted in it being put on hold as part of a series of measures taken by countries and institutions to apply pressure to President Putin to withdraw troops. Russia receives considerable revenue from the sale of Gas and so would be reluctant to stop supplying Europe. The outcome would be global price rises and considerable damage to economies.

There has already been concern that Russia could use its Gas reserves to apply pressure to Europe, so these events will focus attention on finding alternate sources and increasing investment elsewhere.

Temperatures will likely remain in the region of seasonal norm in March. 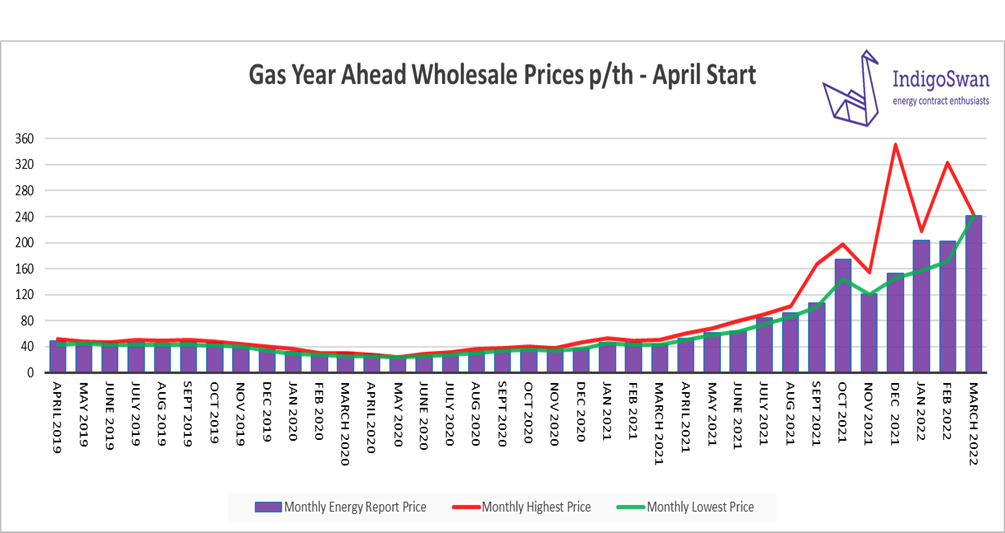 The contribution of Gas to generation in February was lower at just 24%, compared to 40% in January. Although the high winds have caused damage and disruption, they did result in Wind’s contribution to generation increasing to a very high 35% in February, regularly achieving 40% and peaking at 46% on the 12th. Unfortunately, Wind will remain unreliable, with no effective way of storing excess power for use when the contribution is lower.

The National Grid has mechanisms in place to secure additional supplies or reduce demand. These do come at a cost premium, in the form of higher third-party charges within Electricity bills, but provide an element of stability to prices which otherwise may react even more dramatically.

Due to the reliance on Gas generation in the UK, Electricity prices will continue to be impacted by the events in Ukraine and the measures put in place by both sides. There are other considerations which are factored into prices, such as the announcement by EDF that their forecasts for French Nuclear generation for 2022 are now lower, which may impact on the availability of supplies across Europe through Interconnectors.